Holiday Parties Should Be Festive!

But you should forget the mistletoe & skip the inappropriate gag gifts. . . 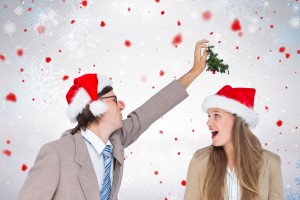 Holiday parties offer a chance for employees to interact with one another in a more casual atmosphere outside of the office, away from the stressors of work.  They can also build morale.  If, however, employees become too “casual” at the party, you as an employer might face unwanted legal trouble.  Consider the following scenarios from lawsuits filed in courts across the country:

These scenarios are offered partly for amusement, but also as examples of situations to prevent, or to immediately stop if they happen at your holiday party.  Many of the examples provided above are “no-brainers,” and conversely, some might seem bland.  But all of them can potentially lead to internal complaints, EEOC charges, or lawsuits, especially if the conduct is combined with a pattern of other bad actions from the same employee before or after the party (which will generally exist in these situations).

Aside from the risk of sexual harassment complaints, employers must recognize the risks associated with “overserving” alcohol at holiday parties, such as automobile accidents caused by intoxicated employees driving home.  One shocking California appellate case held an employer may be liable for a death caused by its intoxicated employee that occurred after the employee had returned home, and then left his home to pick up a co-worker and drive the co-worker home.  (Purton v. Marriott International, Inc. (2013) 218 Cal.App.4th 499.) The employer was potentially on the hook because it started the “chain of events” that led to the death.  The case ultimately did not go to trial after this appellate ruling, and might have resulted in a costly confidential settlement.

Below are steps employers should consider taking in order to prevent trouble at their holiday party:

Holiday parties should be festive, not a source of worry for companies.  It is rare for employees to engage in the bad acts described above, but it does happen.  A few simple steps can greatly reduce the chance of such trouble happening at your party and save your business money in the long run.